The mickey mouse Big Bash Cricket is over, when it comes to the game at a Domestic level nothing compares to the Marsh one day series and of course, the Sheffield Shield.

These days played off-broadway, has been reduced in length and is overshadowed by Big Bash, Other T20 tournaments and the never-ending calendar of international Cricket.

However, the cancelled international tour of South Africa has resulted in both the Marsh Cup and Shield fielding some of the most elite players Australia has to offer.

This is how domestic Cricket SHOULD be.

The glory days of the Mercantile Mutual Cup saw grounds like North Sydney Oval packed out to watch Shane Lee hit the sign for $90k against the Canberra Comets.

You knew it was summer when Channel 9 had the A-Team of commentators down at Adelaide Oval on a Sunday morning in October broadcasting a blockbuster been the SA Redbacks and the Tasmanian Tigers.

With the now “Marsh Cup” (Whatever Marsh is) back in action, we’ve come up with some solutions to bring Domestic One Day Cricket back to its rightful place in the Australian sporting landscape.

(1) Bring back the Mercantile Mutual Cup

Over the years, it’s been known as the Gillette Cup, McDonalds Cup, FAI Cup, ING Cup, Ford Ranger Cup, Matador BBQ Cup, JLT Cup and now the Marsh Cup but we all know what its called in our hearts.

Granted, Mercantile Mutual doesn’t exist anymore (it’s now ING for those of you who are curious) but naming it in the honour of the sponsor that gave it it’s glory days and the trophy shaped liked the Logo would be taking the tournament back its roots.

As suggested by our colleague  Tom Hackett on Twitter a couple of years ago, if you do happen to win the $150 million in lotto, please buy the naming rights and call it the Mercantile Mutual Cup.

If I win Powerball on Thursday, I plan to take over the sponsorship of the Australian Domestic One Day Competition and name it the Mercantile Mutual Cup.

Mercantile Mutual became ING and therefore the competition would be known as the ING Cup, and to be fair, this advertisement is EPIC.

Brett Lee may have had one of the great international Cricket careers, but his brother Shane (also from the band Six and Out)  hit the sign and won $90K which easily paid for the NSW Blues post-season trip that season.

Steve Waugh may have been one of the greatest captains of the Australian Cricket Team leading them on in the glory years, he also hit the sign.

Even if he never wore a baggy green, he’d still be remembered for this unbelievable feat. were he won $140K and split it amongst his NSW  teammates.

The Mercantile Mutual Cup became the ING Cup in the early 2000s and to the credit of the new sponsor, they kept the “hit the sign” legacy going, such as this epic one from South Australia’s Graham Manou back in the summer of 2002-03 at Adelaide Oval.

Like hitting the sign, it goes without saying that bringing back the Canberra Comets would also add to making one-day domestic Cricket great again.

For three magical summers, the Comets from 1997-98 – 1999- 2000, with the likes of Merv Hughes and Mike Veletta tearing it up at Manuka Oval and wooed the ACT locals into a Cricket frenzy

What was best about them is they didn’t play Shield, they were exclusive to the Mercantile Mutual Cup.

If Canberra can host International Test Matches, they can have a team in the one-day comp.

Granted, The Comets copped some beltings back in the day, like the time Brad Hodge scored a century for the Vics against them at Richmond’s Punt Road Oval.

Not only was there an Ashes series and Australia A played in the World Series Cup resulting in a final between Australia v Australia A, Victoria made a fashion statement and wore shorts.

The shorts would be embraced by the Cricket public again should the Vics want to bring them back.

What a wonderful way for the likes of Marcus Harris, Will Sutherland or Peter Siddle to show off the pins on the pitch just like Brad Hodge and Merv did back in the day.

Granted, there are a fair few domestic Cricketers that have a high-profile in the age of T20 Cricket but the cult-like status of Shaun Young, Jimmy Maher, Andy Bichel not being the 12th man, MacGill bowling to Warner, Brendan Creevey, Trevor Barsby, Kade Harvey or even Canberra Comets gun bowler Stuart Karppinen.

These were the heroes of domestic one-day Cricket, and the king of them all; the one, the only Richard Chee Quee.

One-day Cricket uniforms change frequently but after much discussion in the Neds office and studying this amazing blog by writer Russel Jackson on every domestic one-day outfit ever, we’ve come to the conclusion that the barcode gear of the mid-late 1990s was the best,

Couldn’t wait for #mercantilemutualmonday but after after a recent generous swap, I am only couple of shirts short of the having all of early-mid 90’s Australian domestic @CupMutual shirts. Partly inspired by @rustyjacko blog:https://t.co/RSN66KACgW@RedbackJim @LeagueTees pic.twitter.com/WSCGen2rrY

The Australian team, the visiting team and all the domestic teams had a barcode uniform.

As modelled by Greg Matthews and Merv Hughes, the barcode really brought out the beauty in these Cricketing titans. 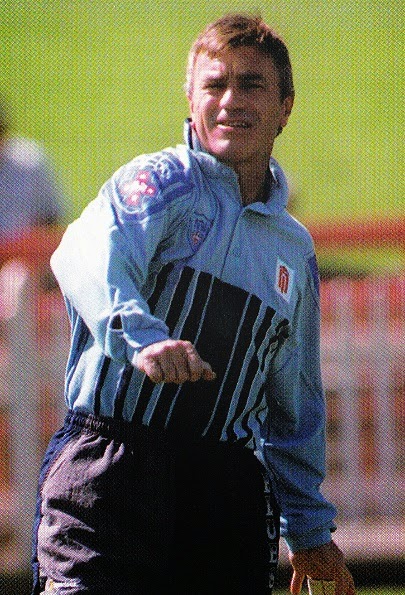 However, some state teams got on the action of having a jingle – like this beauty from the Queensland Bulls.

And the Tasmanian Tigers had this beauty.

“TASMANIAN TIGERS. THEY’RE A VICTORY MACHINE. BEST THEY’VE EVER BEEN. IN THE RED, YELLOW AND GREEN.”